Predictably after the success of The Avengers, Warner Bros and DC are dusting off their previously a 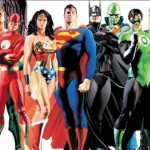 bandoned plans for The Justice League, in the past an ensemble superhero movie was deemed impossible.
According to Variety, Gangster Squad writer Will Beall is on script writing duties
It hasn’t been announced which superheroes will star, but with The an of Steel out next year, smart money would be on Henry Cavill’s Superman and, considering Warner Bros have been trying to reboot Wonder Woman for a number of years, I’d be surprised if she didn’t feature.