ITV1 have confirmed they have commissioned a full series of the Inspector Morse pilot, Endeavour. The pilot air 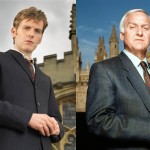 ed back in January and was a critical and ratings success. Shaun Evans will reprise his role as the young Inspector Morse and Roger Allam will return as Endeavour’s mentor, Detective Inspector Fred Thursday.

The series will be written by Lewis creator Russell Lewis and will consist of four new two-hour episodes. Filming is due to take place in Oxford later this year.

Read our review of the pilot here