Holiday on Ice returns with an explosive new show Speed – more dramatic, more dangerous and faster than anything ever before staged on ice! 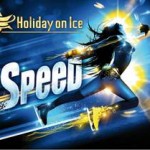 orld-class skaters, dancers and aerial artists from all over the world perform in Speed, a show combining death defying stunts, burlesque, skating, dance and electro circus. This revolutionary show is sexy, fast and full of adrenalin.

Created by international Director Bart Doerfler, the creative force behind many award-winning shows worldwide, Speed takes audiences on an electrifying journey through the speed of love, money, nature, time and thrill. Bart’s extensive experience as a director and choreographer has served him well in film, television, commercials and music videos.  He has worked with Sony Records, NBC, ABC, MTV, ESPN, The Walt Disney Company and Universal Studios Japan.

Speed breaks the boundaries of traditional ice shows, with stunt motorbikes roaring and skidding across the ice, dancers perform on a floating platform high above the ice and a speed skating race excites audiences as they cheer for their winner, all accompanied by an exciting score of powerful music from techno to rock ‘n’ roll created especially for the show.

The legendary Holiday on Ice wheel and the famous kick line are spectacular, stunt skaters deliver a hot skating duel, and flying acrobats conquer the air above the ice.

Audiences will be on the edge of their seats watching the breathtaking stunts, captivated by  the amazing electro show, basking in the sultry atmosphere of the burlesque inspired speed of time scene and excited by the incredible choreography.

Caspar Gerwe, Managing Director of Stage Entertanment Touring Productions said; ‘We are racing into a new era of Holiday on Ice shows. Speed is breaking the barrier not only with international world-class skaters, but with stunt men, aerial artists, professional motorcyclists, dancers and short track racers. Together with a remarkable creative team, Holiday on Ice has produced the impossible.

Speed will be thrilling audiences in Exeter from 15-18 November, Brighton from 22-25 November and Nottingham from 30 November – 2 December. For full tour details and ticket information visit www.holidayonice.co.uk  or call 0844 581 1314