Christopher Eccleston was born in Salford, Lancashire on the 16th 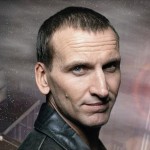 of February 1964. After being classically trained as an actor Chris won the role of Derek Bentley in the great British Film “Let Him Have It.” I best remember Chris for his long-running role as the lead detective in the ITV show “Cracker” alongside Robbie Coltrane and for his excellent acting the well-cast BBC drama “Our Friends in the North” with Daniel Craig and Mark Strong, amongst others. He has had a moderately successful film career with hits such as “The Others” with Nicole Kidman. Strong-willed, he’ll only take parts that appeal to him as am actor; not for the fame. He even turned down a role with Steven Spielberg in “Saving Private Ryan.”

When rumours surfaced that acclaimed writer Russell T. Davies was relaunching the Doctor Who character, Chris emailed his old friend and asked to play the title role. Even though Chris admits publicly that he was not a fan of the show and was just after the opportunity to work with Russell again, he became the first actor born after the original 1963 transmission to take on the role. Maybe it was the qualities of his acting or disregarding the expectations of fans but when Chris became the 9th Doctor he set a benchmark for future actors in the role. He brought humour, humility and darkness to his portrayal and brought a new style to the Doctor/companion relationship with Rose Tyler, played by the brilliant ex-pop star Billie Piper.

We are probably not going to see Chris amid the forthcoming 50th-anniversary celebrations as he doesn’t like to talk about Doctor Who and doesn’t tend to go back to roles once he has left them; that will be a great shame. Christopher Eccleston made the Doctor character his own and made sure any future portrayal would have to be top class.