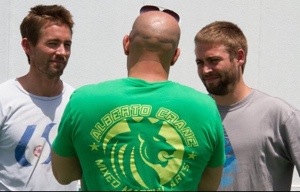 Vin Diesel today posted a photo on his Facebook page.
It’s him with Paul Walker’s brothers,
Caleb and Cody. The pair will serve as stand-in’s for Paul on the film.
Apparently most of Paul’s close-up’s were shot before his sad passing, so the duo will serve as body doubles for the long shots.
It’s a great way for them to pay tribute to their brother and, give fans of the franchise the movie they’ve been waiting for. Cody (right of Diesel) looks the most like Paul and could easily pass for him, but they both share certain features with their brother.

The picture was accompanied by the following text.

“When I heard the news, I left the production, grabbed a plane and took my family and Michelle back to LA… drove directly to his parent’s house…
His Father said, Paul loved you Vin… I awkwardly and nervously said, aw come on… then he said… you don’t have to get along every second to love each other… so true.
P.s. After spending time with his biological brothers, I must say to the parents, you raised some great kids”.

The film has been rescheduled and is expected to open on April 10th, 2015.