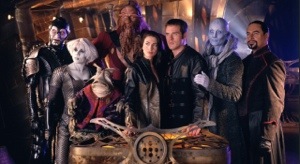 Earlier this year reports started to surface about a much rumoured Farscape spin-off movie. Now, the news has been confirmed by the series original creator, Rockne O’Bannon.
When asked in a recent interview O’Bannon said:

“Yeah, yeah, it’s the worst kept secret. We’re far from production, but yeah, the first step is Justin Monjo working on a script for us. We’ll keep our fingers crossed.”

Brian Henson is set to direct and the cast are all said to have expressed interest in reprising their roles.

I’ve only recently discovered the world of Farscape, so I’m looking forward to seeing a big screen continuation.