Here’s a sneak-peak clip at the Kraang and an image of the voice talent: 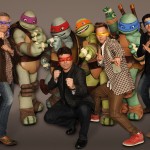