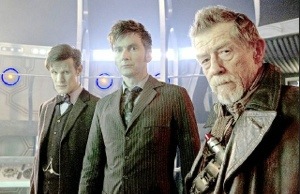 After taking an impressive £1.8million at the UK box office the fiftieth anniversary special of Doctor Who has made an impressive $4.8million.
The specially filmed 3D special played in 660 US cinemas on Monday.
In Australia it made $1.5M (AU).

After only being open for one day, Day of the Doctor globally racked up £6.5million and is currently second place in the US film charts.

With the success of this, I’d say a Doctor Who movie is pretty much guaranteed.