Doctor who managed to secure 6.38 million viewers, for a Asylum of the Daleks, with a total audience share of 2 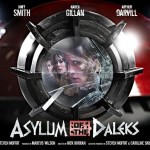 9.3%. Yes, it is the least number of viewers that have tuned in, since 2005. But, lets put this in to context. Great Britain is currently hosting the Paralympics, which as attracted a record amount of ticket sales and interest, the games are airing on another broadcaster, so that would account to a lot of people time-shifting the episode.  It’s already number one on the iPlayer. I’m fairly sure that once the weekly figures are consolidated, we’ll be looking at close to 9 million viewers.

Listen to our episode about Asylum of the daleks