The BBC have announced details for the upcoming Dirk Gently 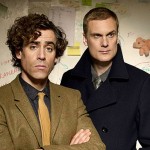 Starring Stephen Mangan as Douglas Adams’ self-styled Holistic Detective. Perennially broke and morally dubious, Dirk’s methods are based on ‘The Fundamental Interconnectedness of All Things’.

Darren Boyd stars alongside as Dirk’s business partner Richard Macduff, who attempts to rein in Dirk’s more tangential decisions, keep them both out of prison and generally restore order to the chaos that Dirk creates.

Created by one of Britain’s most exciting screenwriting talents, Howard Overman (Misfits), from the books by Douglas Adams, Dirk Gently is a dramatic, witty and intelligent series with plots that delight, surprise but ultimately satisfy – and with two characters at the heart of each story that you just want to spend time with, brilliantly portrayed by Stephen Mangan and Darren Boyd.

The series also boasts a sensational cast of regulars returning from the pilot – Helen Baxendale as Macduff’s girlfriend Susan in Episode 2, Jason Watkins as Det. Insp Gilks in Eps 1 and 3 with Lisa Jackson returning as the unpaid, unloved and quite deeply disturbed receptionist Janice Pearce across the series.

Written by Howard Overman. Dirk discovers the connection between two unrelated cases; a client who believes the Pentagon are trying to kill him and another who’s horoscopes appear to be coming true.

Written by Matt Jones. Dirk is called back to his old university to protect a valuable robot but within 24 hours it has been stolen and a dead body discovered, with Dirk & Macduff the prime suspect.

Written by Jamie Mathieson. They are alarmed to discover that Dirk’s old clients are-  being randomly murdered with Dirk as the only link. Rather than talk to the police, Dirk elects to leave the country but is waylaid by a series of seemingly unconnected events.

The series is directed by Tom Shankland and produced by Chris Carey with music composed by Daniel Pemberton.

The show’s executive producers are Saurabh Kakkar for ITV Studios and Brian Minchin for the BBC. The series is produced by ITV Studios in Association with The Welded Tandem Picture Company for BBC Cymru Wales for BBC Four.

Stephen Mangan says: “Slipping back into Dirk’s pointy shoes to renew my double act with Darren Boyd for three brand new episodes is, for me, about as good as it gets. I wish I WAS Dirk.”

Howard Overman says: “It’s a real honour to back in the world of Dirk’s holistic detection methods. He’s the loosest of loose cannons and it’s always fun putting such outrageous lines in his mouth to see them so skillfully delivered by Stephen Mangan and the rest of the brilliant cast.”

The show’s producer Chris Carey says: “Dirk Gently feels like a rare and precious storytelling gift. Douglas Adam’s books are treasure troves filled with brilliant details and profound, hilarious observations that Howard and the other writers endlessly mine to lead them off into new tales for Stephen and Darren to bring memorably to life on screen.”