Dexter is back and more deadly than ever when DEXT 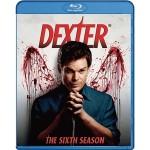 ER: THE COMPLETE SIXTH SEASONarrives on DVD and Blu-ray on 18 June from Paramount Home Entertainment.

Dexter’s Dark Passenger is still alive and well as he manages to stay in the shadows, do his job and be a single father. With Trinity in his rearview mirror, life becomes a bit more complicated for Dexter as his sister Deb explores new relationship boundaries, and he discovers religion in more ways than one. A breakout of gruesome killings based on the Book of Revelations and the emergence of the Domesday Killer puts Dexter and Miami Homicide on the hunt for a new beast of biblical proportions. Can Dexter catch him before the Apocalypse? Or is this holy beast too much even for him?

DEXTER received multiple 2011 Golden Globe® nominations, including Best Television Series—Drama, Best Performance by an Actor in a Television Series—Drama (Michael C. Hall). As of February 2012, Dexter has been nominated for over 100 awards and has won 35. Dexter fans are in for a treat as the show has also been greenlit for another two seasons.