David Attenborough comes face to face with a floral scu

lpture of himself at the gates of Kew Gardens to launch his new three part Sky 3D series Kingdom of Plants 3D.

The sculpture was created by three time RHS Chelsea Flower Show Gold Medallist and Best in Show winner (years 2009, 2010, 2011) artist Joe Massie and took a team of 6 two days to perfect.  The artwork uses 50 species of plants including many of those seen in the series such Passionflowers, Sempervium and Nepenthes plants.  A Phalaenopsis orchid is used as the focal piece in David’s hands and over 1000 flowers were used to create the likeness which was made to his measurements.

Kingdom of Plants 3D With David Attenborough begins Saturday 26th May, 6pm on Sky 3D and for the first time will also by shown simultaneously in 2D on Sky Atlantic.  The series was filmed at The Royal Botanic Gardens, Kew and focuses on three themes, Life in the Wet Zone, Solving the Secrets and Survival.

Joe commented, “This project was definitely out of the ordinary, it was a great challenge to take on.  The finished sculpture embodies ev 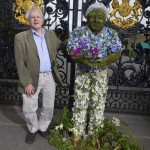 erything that the series has to offer: Sir David with the world of Kew’s exciting plants all set in a 3D form.  To have the man himself come face to face with the sculpture really completes the scene and I hope he is as thrilled as we are with the finished work.”

David Attenborough added: “This is certainly a first! I never imagined that I would ever come face to face with my floral double – Joe has worked extremely hard on the artwork.”