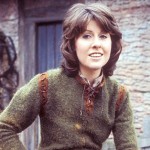 The BBC have announced that there will be a special tribute programme broadcast this coming Saturday, called My Sarah Jane. It is due to be shown on the CBBC channel at 6:45pm, directly after Doctor Who finishes on BBC1 and before Doctor Who Confidential on BBC3 at 7:00pm.
They have also announced that there will be a text tribute, on screen at the start of the episode