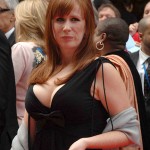 Catherine Tate stole the finale episode of series 7, of The Office (US) last night as Nellie Bertram- a potential replacement for the departing boss of Dunder Mifflin, Michael Scott (Steve Carell).  It’s been reported the producers are keen to have Tate make her appearance a permanent one. She is said to be the top choice, though her ability to take the job is in question due to her current stint in the West End, with her former Doctor Who co-star, David Tennant. In much ado about nothing, which has opened to rave reviews