I love non-fiction books. I have an unhealthy obsession with Americ 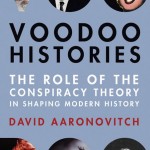 an politics dating back to lessons received through my school years. I love tragic real-life stories like the one of Bernie Madoff who stole $65 billion and almost single-handed started the worldwide recession we find our selves in as I write. But most of all I love a good conspiracy theory.

Now let me explain before you think I am one of those insane people that wants to fill your mind with ludicrous stories of aliens running the planet, I love a good conspiracy theory because I like the fact a ridiculous notion can have such an overwhelming effect on what you describe as normal everyday folk, and turn their irrational fears into a warped reality.

This is how a conspiracy theory can flourish in the first place, Fear. If someone tugs on the strings in your psyche that control your fears, even the most logical of people can have their fragile world changed in the way someone, normally politicians or the media, would like it.

David Aaronovitch is an award-winning journalist. He has written for some of the best media publications this country has to offer and I personally follow him on Twitter as I really like his views and the way his mind works. So when the chance arose for me to read Voodoo Histories – how conspiracy theory has shaped modern history, I was incredibly excited.

Published by Vintage books in 2010, the book starts with an explanation as to why David wanted to write it in the first place, goes on to explain how awash we are with conspiracy literature in the western world in these modern times and then one by one goes through some of the greatest conspiracy theories and, well, to be frank, debunks them.

In a difference to many books of this nature, the author doesn’t just tell you that you are wrong to believe such rubbish and then give you his opinion as to why. David Aaronovitch explains every detail of fact for each case, gives the arguments for and against the theory, and then using actual evidence and a spoonful of the common sense removed from the believers, explains how the theory is flawed and cannot be the case.

I don’t want to give examples in this review as I don’t think I could without ruining the book for others. However all the usual suspects are in here, Marilyn Monroe’s death, the Kennedy brothers assassination, the DaVinci Code, which was actually proved wrong in the 1970s yet Dan Brown and millions of others still fell for it, and so many more.

A fantastic read for anyone with an opinion on conspiracy theory. If you believe, a debate will rage, if you do not believe you will feel vindicated, and if you have no belief either way, well then you will just be thoroughly entertained.