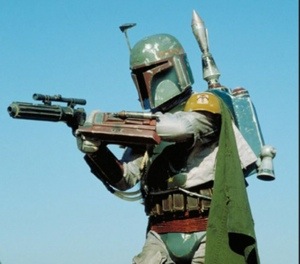 The movie universe was surprised last year, when Disney bought Lucasfilm and the rights to the Star Wars franchise. They announced they would be producing five new films, three would be a continuation of the saga, but there would also be two stand alone spin-off’s based on established characters in the Star Wars universe.

A Yoda movie was the first rumored prospect for spin-off; but yesterday it was confirmed that Bounty Hunter Boba Fett would be getting his own movie.
It’s a safe choice to make, Bobba is a beloved character amongst Star Wars fans.
Lawrence Kasdan has apparently been hired to write and Jon Schnepp to direct.

Another rumour floating around is that Disney are interested in a Han Solo movie, set between Revenge of the Sith and A new hope. This rumour may actually hold a little weight, a teenage Han was cast for Revenge of the Sith but the character was cut before filming began, due to running time.

Also this week came the news that Marvel (also owned by Disney) would be producing a new range of Star Wars comics.