It’s been a long, long wait for the return of Steven Moffat and Mark 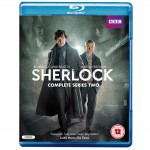 Gatiss’ modern-day Sherlock and it looks like we will have to wait just as long for the confirmed third series.
The first episode “A Scandal in Belgravia” picks up exactly where the last episode left our heroes, by the swimming pool with Moriarty and covered with sniper dots.
Some viewers will be disappointed by the resolution, but I loved it, it was bold, funny, cheeky and slightly outrageous. Moffat and Gattis know the online forums will be buzzing after this.
The relationship between Sherlcok and Mrs. Hudson is explored a little more and shows just how much they mean to each other. The already great cast has got a new addition in the form of Irene Adler, played by Lara Pulver. Pulver puts in a fantastic performance as Irene and provides the female counterpart to Sherlock.
This is a really great episode, the text effect is still being used but this time it’s accompanied by some excellent camera work to help give us a little bit more insight to just how Sherlock views the world.
Like the first series, episode two, “The Hounds of Baskerville”, is the weakest, but it was always going to be the most difficult to pull off. It is the weakest, but it is still highly enjoyable and better than 99% of today’s TV output.

It’s the finale that was most surprising, written by Stephen Thompson, who has worked on Sherlock and Doctor Who, both of which episodes have been voted the worst episodes by fans. But, he redeemed himself with The Reichenbach Fall. This episode clearly belongs to Andrew Scott, his version of Jim Moriarty is the classic old-fashioned villain, he causes havoc and just wants to see the world burn. Every villain in everything is based on the original Moriarty. Andrew Scott knows this and to his credit gives us something completely new and original. The finale has had most fans scratching their heads, but here at Bad Wilf, we’ve worked it out.