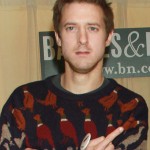 Arthur Darvill’s television credits include Doctor Who, Little Dorrit for the BBC and He Kills Coppers on ITV. He was nominated for Best Newcomer at the Evening Standard Awards in 2007 for his role as Rex in Swimming with Sharks (Vaudeville), his other theatre credits include Tierre Haute (Trafalgar Studios) and Stacy (Arcola). Arthur is a musician and composer and has collaborated with playwright Ché Walker in writing songs for The Frontline (Shakespeare’s Globe) and Been So Long (Young Vic/UK Tour).

The play runs from 18th June until the 2nd October 2011. For more details on the production, see the Shakespeare’s Globe website, at
www.shakespearesglobe.com