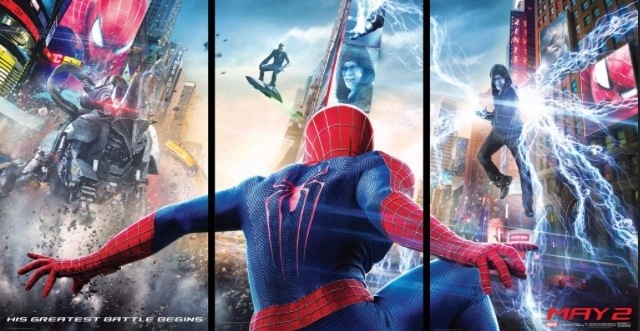 The Odeon Cinema in Leicester Square will play host to the spectacular World Premiere event. The cast and filmmakers of the highly anticipated new movie will swing into town to lead a glittering array of star guests walking the red carpet: Spider-Man himself, British star Andrew Garfield, will be joined by a stellar line up of fellow cast members, including Emma Stone (Gwen Stacy), Jamie Foxx (Electro), and Dane DeHaan (Harry Osborn), alongside director Marc Webb and producers Avi Arad and Matt Tolmach.

A UK World Premiere will be a first for the nation’s favourite web-slinging Super Hero – never before has London hosted the global launch for a Spider-Man movie.

Garfield said, “I’m delighted to see the World Premiere of The Amazing Spider-Man 2 take place in my home town. I can’t wait to present this movie to audiences across the UK.”

In addition to the London Leicester Square Premiere event, fans across the UK and Ireland will have the chance to be part of this Amazing occasion as The Amazing Spider-Man 2 will also be shown simultaneously at 20 regional premieres.

It’s great to be Spider-Man (Andrew Garfield). For Peter Parker, there’s no feeling quite like swinging between skyscrapers, embracing being the hero, and spending time with Gwen (Emma Stone). But being Spider-Man comes at a price: only Spider-Man can protect his fellow New Yorkers from the formidable villains that threaten the city. With the emergence of Electro (Jamie Foxx), Peter must confront a foe far more powerful than he. And as his old friend, Harry Osborn (Dane DeHaan), returns, Peter comes to realize that all of his enemies have one thing in common: Oscorp. Directed by Marc Webb. Produced by Avi Arad and Matt Tolmach. Screenplay by Alex Kurtzman & Roberto Orci & Jeff Pinkner. Screen Story by Alex Kurtzman & Roberto Orci & Jeff Pinkner and James Vanderbilt. Based on the Marvel Comic Book by Stan Lee and Steve Ditko. The film will be released in theaters internationally beginning April 16, 2014, and in the U.S. on May 2, 2014. #SpiderMan