Actor David Bradley, will receive an Honorary degree from the University of Warwick. The University’s summer graduation will take place throughout the week commencing July 16. David Bradley will obtain a Hon DLitt.
He is a celebrated character actor of stage and screen. Born in York, he began his acting career in 1971, at Sir Laurence Olivier’s National Theatre. He also made his first television appearance in that year, playing a police officer in the popular comedy Nearest and Dearest. He now lives in Stratford-upon-Avon, where he serves as President of the Second Thoughts Drama Group.
He was awarded a Laurence Olivier Award in 1991 for his supporting actor role in King Lear at the Royal National Theatre. He has appeared in the Royal National Theatre’s 1997 production of Harold Pinter’s The Homecoming, as well as productions of Pinter’s The Caretaker at Sheffield Theatres and the Tricycle Theatre in London in 2006/2007.
His television work includes the 1996 award-winning BBC Two series Our Friends in the North; the BBC adaptation of Vanity Fair; the 2004 BBC One drama serials Blackpool (2004), Mr Harvey Lights a Candle (2005) and Sweeney Todd (2006); Midsomer Murders (2006) and Ashes to Ashes(2009).
David Bradley’s many film credits include Nicholas Nickleby (2002) and Hot Fuzz (2007). He is well-known for playing the caretaker of Hogwarts, Argus Filch, in the Harry Potter series of films.
Harry Potter is not the only fantasy or science fiction Universe in which he has appeared. He also played Cohen the Barbarian in a Sky One adaptation of The Colour of Magic by fellow Warwick Honorary Graduate, Terry Pratchett. David Bradley provided the voice of the Shansheeth in The Sarah Jane Adventures story, ‘Death of the Doctor’. He is also set to appear in series seven of the modern era Doctor Who. 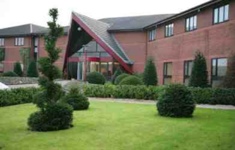