Channel 5 announced today that ‘The World’s Ugliest Dog’, Mugly, is to star in his very own documentary, Mutt Ugly which TX’s in August on Channel 5 (1×60 minutes).
2012 is awash with major global events but they don’t come much bigger than the highly competitive and insanely brilliant…’The World’s Ugliest Dog Contest!’
Produced by Dead or Alive Films, Mutt Ugly follows Mugly’s progress, from his preparations in the UK, his first flight and his arrival in the US, his interaction with fellow contestants, his exploits at the contest itself and the media storm that follows him and his owner Bev as they win and claim the title for the UK for the first time!
As Mugly and Bev arrive at the annual competition, which is now in its 24th year, held in Petaluma, California they realise the scale of the contest. The competition brings together some of the planet’s most aesthetically challenged canines to an audience of hundreds, all vying to be crowned ‘The World’s Ugliest Dog’, and become an overnight, global sensation.
Muggly’s opponents include Rascal and his owner Dane Andrew from California. Rascal is a Chinese Crested and won the competition in 2002. Rascal is apparently so ugly that Jay Leno put him on the Tonight Show and he has been cast in four horror movies. Other stiff competition includes Icky and Princess Abby. Icky was a hot favourite for this year and Princess Abby, a previous winner, has a hunched walk, a missing eye and mismatched ears. Incredibly, however, throughout the contest’s illustrious history, there has never been a British entrant…that is until Mugly touches down Stateside!
Already worthy of star-status, Mugly has an extensive wardrobe, though not just to remain stylish but for health reasons. As a near-hairless Chinese Crested, Mugly gets very cold in the winter and burnt in the summer if he’s not wearing sun block.
Ahead of judgment day, cameras visit previous winners and their owners, meet this year’s favourites and consult a host of experts to find out what it’s like being a not-so-pretty pooch and the possible effects that both the competition and super-stardom could have on man’s best friend.
As the competition arrives, nerves are at an all time high and owner Bev can hardly believe it as Mugly is crowned ‘The World’s Ugliest Dog’ and returns home victorious.
Michelle Chappell, Commissioning Editor for News, Current Affairs and Documentaries at Channel 5 comments: “The World’s Ugliest Dog Contest proves there’s more to this year than football and the Olympics! Mugly is the GB success story of 2012 and we’ve no doubt viewers will love this fun documentary.”

MUTT UGLY is produced by Dead or Alive Films and will air on Channel 5 in August. 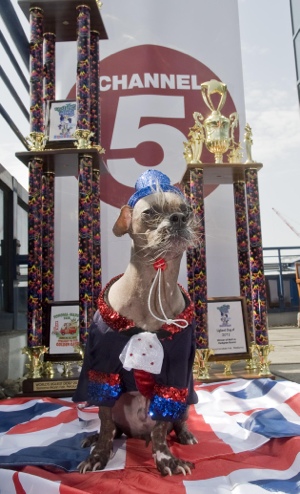